The birth of Hazrat Maryam (as) was a significant turning point in history because it marked a moment in time when something unknown to the world was about to happen.

Hazrat Maryam (as) is one of the most respected and revered women in history. The Holy Qur’an names an entire chapter after her. The Holy Qur’an presents her as a model for all true believers to follow. She has been mentioned by the Holy Prophet (saw) as one of the four most honourable women in the world.

Before Hazrat Maryam (as) was born, her mother (Hannah) made a promise to God that she would dedicate her child’s life to the service of the Jewish temple.

Allah says in the Holy Qur’an:

“Remember when the woman of Imran said, “My Lord, I have vowed to Thee what is in my womb to be dedicated to Thy service. So do accept it of me; verily, Thou alone art All-Hearing, All-Knowing.” (Al-e-Imran; verse 36).

This is a very special prayer. Hazrat Khalifatul Masih V (aba) has said about it:

“this prayer has not been related merely as a tale of the past, rather God loves it so much that He desires all mothers to pray likewise and devote their children for extraordinary service of their faith.”.

As only male children were accepted in the service of temple, Hannah was quite perplexed when she gave birth to a girl. She said “My Lord! I have given birth to a girl.”.

The Holy Qur’an states that Allah knew best what she had given birth to. This implied that the girl, Mary, was not an ordinary girl. God had blessed her with qualities which made her a very special and extraordinary child, even better than the boy Hannah was hoping for.

Under the Mosaic Law, a female could not serve God, However Allah accepted Hannah’s commitment.

“So her Lord accepted her with a gracious acceptance and caused her to grow an excellent growth and made Zachariah(as) her guardian.” (Al-e-Imran, verse 38).

Even as a child, she dedicated her entire time to the worship of God. She would spend most of her time worshiping in her chamber. She was extremely intelligent and was able to understand scriptures at a very young age.

Whenever Hazrat Zachariah (as) visited her, he found her with provisions. These were gifts of food and drink brought by visitors to the Temple. When Hazrat Zachariah (as) asked her where they had come from, she replied, they are from Allah. This response of hers indicates the degree of her piety and reliance on Allah, and her recognition that ultimately all of our sustenance comes from the Almighty. This is mentioned in the Holy Qur’an:

“So her Lord accepted her with a gracious acceptance and caused her to grow an excellent growth and made Zachariah her guardian. Whenever Zachariah visited her in the chamber, he found with her provisions. He said, “O Mary, whence hast thou this?” She replied, “It is from Allah.” Surely, Allah gives to whomsoever He pleases without measure.” (Al-e-Imran: verse 38).

Time went by and Hazrat Maryam (as) continued serving in the temple. One day, while she was praying to God Almighty in seclusion, an angel appeared to her and conveyed the divine message that she would have a son. She said:

“How can I have a son when no man has touched me, neither have I been unchaste?” (Surah Maryam: verse 21).

“Thus it is, but your Lord says, ‘It is easy for Me’ and We shall do so that We may make him a Sign unto people and a mercy from Us, and it is a matter decreed.” (Surah Maryam: verse 22).

Angels appeared to Hazrat Maryam (as) in her dreams and gave her the glad tidings of a son who would be called the Messiah. She was told that he would be honoured in this world and in the next and would be granted nearness to God.

Prophet Jesus(as) was quite young when Hazrat Maryam (as) decided to go back to her town. When people learnt of their return they came out of their houses and surrounded Hazrat Maryam (as). They behaved rudely towards her and asked her lots of questions about her son. Hazrat Maryam (as) was deeply hurt but she did not say anything. Instead she pointed towards Jesus (as). At this they said, “How can we talk to one who is merely a child in the cradle?”. They considered him too young to give them a meaningful explanation. However, they were amazed at his reply:

“Then she brought him to her people, carrying him. They said ‘O Mary thou hast done a strange thing. O sister of Aaron, thy father was not a wicked man nor was thy mother an unchaste woman’.
Then she pointed to him. They said, ‘How can we talk to one who is a child in the cradle?’
He said, ‘I am a servant of Allah. He has given me the book and made me a Prophet;
And He has made me blessed wheresoever I may be and has enjoined upon me Prayer and almsgiving so long as I live. And He has made me dutiful towards my mother and He has not made me haughty and unblessed.’”  (Surah Maryam: verses 28-33)

The word “carrying him” in the above verse means that Hazrat Maryam (as) believed in Hazrat Jesus(as) and helped him in his mission. She reflected his religion in her person, and silently started introducing it to her people.

What Happened to Hazrat Maryam (as) after the Crucifixion of Prophet Jesus (as)?

Hazrat Maryam (as) and the disciples were present when Prophet Jesus(as) was put on the cross. Ahmadi Muslims believe that Prophet Jesus(as) survived death from the cross and secretly left Palestine. He is believed to have travelled through Persia to Afghanistan and finally to Kashmir in India.

We believe that Hazrat Maryam (as) may have accompanied or followed Jesus (as) on his travels to India.

The Holy Qur’an informs us:

“And We made the son of Mary and his mother a Sign, and gave them refuge on an elevated land of green valleys and springs of running water.” (Sura Al Mu’minun: verse 51).

It is also believed that Hazrat Maryam (as) died and was buried at a place called Mari or Murree, named in her honour. Her grave which is known as “Mai mari da asthaan” (which translates as “The resting place of Mother Mary”) can be visited even today. Murree is situated in Northern Pakistan, and is part of the mountainous range which extends into Kashmir.

Hazrat Maryam in the Holy Qur’an

She has been addressed as the chosen one:

“And remember when the angels said: O Mary, Allah has chosen thee and purified thee and chosen thee above the women of all peoples.” (Al-e-Imran: verse 43).

She has been called the truthful in the Holy Qur’an:

“The Messiah, son of Mary, was only a Messenger; surely, Messengers like unto him had indeed passed away before him. And his mother was a truthful woman. They both used to eat food. See how We explain the Signs for their good, and see how they are turned away.” (Al-Maidah: verse 76)

The Qur’an gives two examples of true believers. The first Hazrat Assiya, the wife of Pharaoh, and the second Hazrat Maryam (as). It states:

“And Allah sets forth for those who believe the example of the wife of the wife of Pharaoh when she said, `My Lord! build for me a house with Thee in the Garden, and deliver me from Pharaoh and his  work, and deliver me from the wrongdoing people;
And the example of Mary, the daughter of Imran, who guarded her chastity – so We breathed there in of Our Spirit -and she fulfilled in her person the words of her Lord contained in His books and was one of the obedient.” (Al Tahrim: verses 12-13).

She signifies a true follower of a Prophet and those who have attained true submission to Allah. She has been set as an example for both men and women to follow.

Quote of Hazrat Khalifatul Masih Khamis about Hazrat Maryam (as)

On the 26th of September 2014 at the inauguration of Masjid Maryam in Galway Ireland, Hazrat Khalifatul Masih V (aba) said addressing the guests:

“It has been named ‘Masjid Maryam’. Maryam, or Mary as known to you, is as greatly revered by Muslims as she is by Christians. In fact, in the Holy Qur’an, Allah has mentioned Mary at many instances and highlighted her esteemed status. Mary was the name of that pure and pious woman who is honoured by Islam so much that the Qur’an has said that all true believers are like Mary. This is because Mary established a very special relationship with God and she upheld her virtue and chastity at all times. She developed a special bond of love with God, whereby Allah conversed directly with Mary and He Himself attested to her truth. Mary believed in the Books of God, she was righteous and attained a special rank in terms of her obedience to God. She was most certainly an example for all true believers. Her elevated status is reflected by the fact that the Qur’an says that true Muslims should develop the qualities of Mary and if they do so then they will be those who never cause harm or suffering to anyone. Every Ahmadi Muslim therefore seeks to instil within themselves the purity, nobility and piety of  Mary herself”. 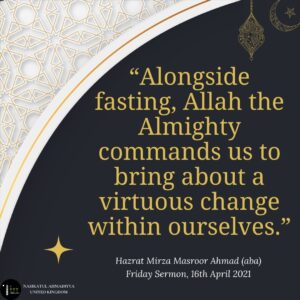