He was brought up in Ur, which in present day is in Iraq, 200 miles east of Baghdad. Hazrat Ibrahim (as) was brought up in the house of his uncle Azar. At the time he was born, the people around him were idolaters (they worshipped idols). From a young age, Hazrat Ibrahim (as) engaged himself in doing good and following a righteous path. Allah says in the Holy Qur’an:

“Abrahim was indeed a paragon of virtue, obedient to Allah, ever inclined to Him, and he was not of those who set up equals to God”

In this Verse, the Qur’an says to Muslims to follow Hazrat Ibrahim’s (as) example, as he believed in the One and Only Allah Almighty and to not follow the other people of that time, the idolaters. (1) The word paragon means a person that is a perfect example of a certain quality. In this Verse it says “… a paragon of virtue …”, so in this case it means that Hazrat Ibrahim (as) was a righteous man, who was the perfect example of all good qualities.

Hazrat Ibrahim’s (as) uncle Azar, ran a shop where idols were sold. Hazrat Ibrahim (as) would observe that the idols were made by humans and then later sold to the people as their gods. Hazrat Ibrahim (as), right from childhood had abhorred idols, and could not stand that people forgot Allah and worshipped idols. He would constantly tell his uncle, the customers of the shop and the public, that there was only one God and tried to show the people the futility of worshiping idols or the sun, moon and stars.

This is just one example of Hazrat Ibrahim’s (as) severe dislike of idols and their worship. From his youth he would not shy from voicing his displeasure again and again. The people had forgotten Hazrat Nuh’s (as) teachings of the Oneness of God and were lost in darkness, worshipping idols. However, in a crowd of thousands, stood Hazrat Ibrahim (as) telling his people repeatedly about the One God. Allah appointed Hazrat Ibrahim (as) as a Prophet to stamp out the worship of idols from society and tell them about their true Creator Allah the Almighty.

Allah has even mentioned one of Hazrat Ibrahim’s (as) debates in the Holy Qur’an. In Surah Al-Anbiya, verses 53 to 71, Allah says the following:

“When he said to his father and his people, ‘What are these images to which you are so devoted?”

“They replied, ‘We found our fathers worshipping them.’”

“He said, ‘Indeed, you yourselves as well as your fathers have been in manifest error.”

“They said, ‘Is it really the truth that thou hast brought us, or art thou one of those who jest?’”

“He replied, ‘Nay, your Lord is the Lord of the heavens and the earth, He Who made them; and I am one of those who bear witness to that.”

‘And, by Allah, I will certainly plan against your idols after you have gone away and turned your backs.’

“So he broke them to pieces, all except the chief of them, that they might return to it for enquiry.”

“They said, ‘Who has done this to our gods? Surely, he must be a wrongdoer.’”

“They said, ‘We heard a young man speak ill of them; he is called Abraham.’”

“They said, ‘Then bring him before the eyes of the people, that they may bear witness.’”

“Then they said to Abraham, ‘Is it thou who hast done this to our gods, O Abraham?’”

“He replied, ‘Aye, somebody has surely done this. Here is their chief. But ask them if they can speak.’”

“Then they turned towards one another and said, ‘You yourselves are surely in the wrong.’“

“And their heads were made to hang low for shame and they said, ‘Certainly thou knowest well that these do not speak.’”

“He said, ‘Do you then worship instead of Allah that which cannot profit you at all, nor harm you?”

‘Fie on you and on that which you worship instead of Allah! Will you not then understand?’

Hazrat Ibrahim (as) rebuked his people by breaking the idols and then by challenging them to ask the idols, if they could speak, to tell them who had broken them. He wanted to demonstrate to his people the foolishness and falsehood of their polytheistic (belief and worship of more than one God) beliefs and practices.

However, his people were such confirmed idolaters that they doubted the seriousness in the message of one God. When he broke the idols, it infuriated his opponents. The chiefs, instead of accepting the truth, were enraged.

“They said, ‘Burn him and help your gods, if at all you mean to do anything.’”

“We said, ‘O fire, be thou cold and a means of safety for Abraham!’”

“And they had sought to do evil to him, but We made them the worst losers.”

It is uncertain how the fire became cool, however Allah helped Hazrat Ibrahim (as) and he was saved from the fire. Later Allah commands Hazrat Ibrahim and his followers to migrate from Ur to the blessed land, which in this case was to Cannan.

Just as Allahs Prophets have had to migrate in the past, for example Hazrat Musa (as) migrated from Egypt to the promised land, and Hazrat Muhammad (saw) who had to migrate from Mecca to Medinah. Allah says in the Qur’an:

And We saved him and Lot and brought them to the land which We blessed for the peoples.

A year later a promised son was born to Hazrat Ibrahim (as) and Hazrat Hajra (ra) by the name of Hazrat Ismael (as). Allah also promised a son from Hazrat Sarah (ra). It says in the Qur’an:

And We gave him the glad tidings of Isaac, a Prophet, and one of the righteous.

A year after the glad tidings of another son, Hazrat Ishaq (as) came into the world. At the time of Hazrat Ishaq’s (ra) birth, Hazrat Ibrahim (as) was 100 years old.

Hazrat Ibrahim (as) always followed Allah’s command. So, when told by Allah, he took Hazrat Hajra (ra) and their son, and left them in a bleak and barren tract, which today is known as Mecca. As he was leaving them there, he prayed to Allah:

Our Lord, I have settled some of my children in an uncultivable valley near Thy Sacred House — our Lord — that they may observe Prayer. So make men’s hearts incline towards them and provide them with fruits, that they may be thankful.

When Hazrat Ibrahim made this prayer, the land was barren and did not even have a single blade of grass. But look at Mecca now and the abundance of fruits it now has! SubhanAllah!

And remember the time when We assigned to Abraham the site of the House and said, ‘Associate not anything with Me, and keep My House clean for those who perform the circuits, and those who stand up and those who bow down and fall prostrate in Prayers

Now, we see millions upon millions of people visit this house of God in Mecca everyday! Alhamdolillah! 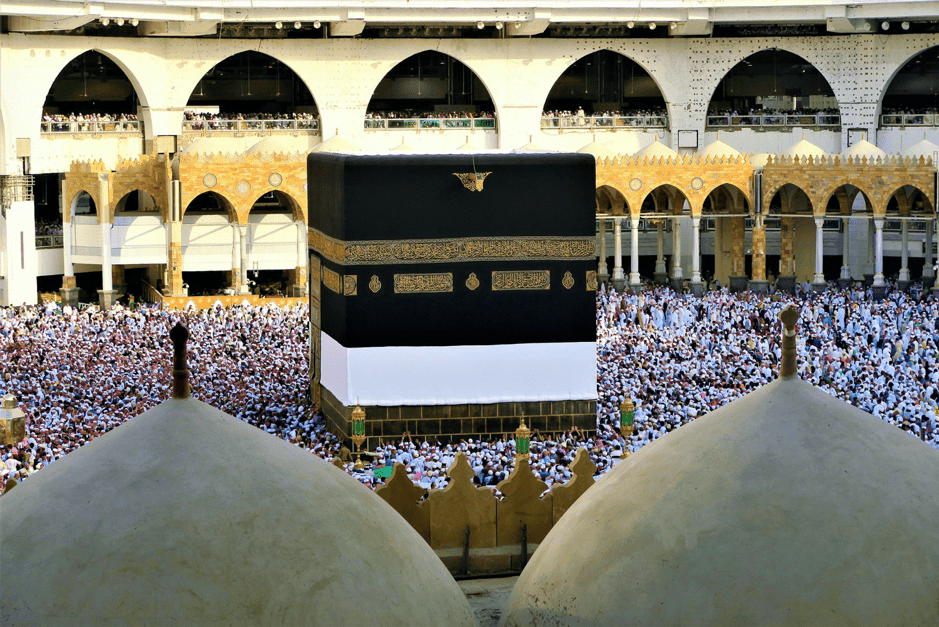