Climate change is the change in temperature and weather patterns over a long period of time. It could refer to a place or the planet as a whole and can surprise us by making weather patterns less predictable. The average temperature of the earth is 15º Celsius. This temperature decreased or increased in the past which is considered completely natural. However, scientists who have been closely monitoring the temperature of our planet have seen that this temperature seems to have been mostly rising and that too faster than any other time. This means that the world has been getting warmer.

The rising warmth of the planet is linked to the greenhouse effect which explains how the atmosphere of the earth traps some of the Sun’s energy. The picture below demonstrates how this phenomenon occurs. 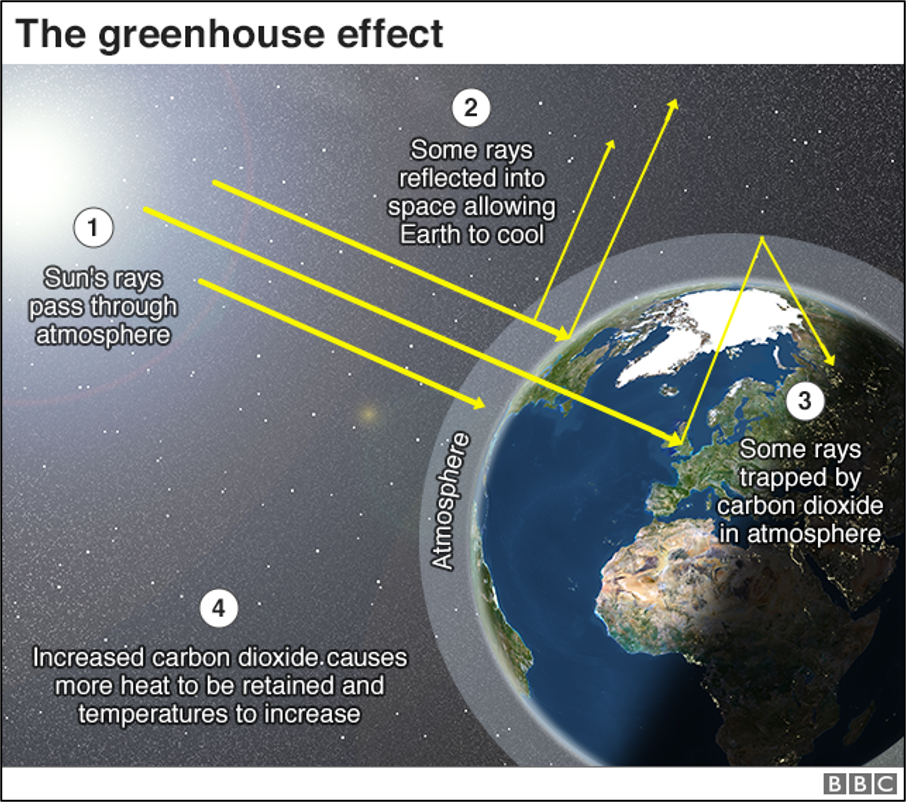 Scientists believe that we are interfering with the natural greenhouse effect by carrying out activities that increase the carbon dioxide in the atmosphere. These activities include burning fossil fuels like coal, gas and oil for industrial purposes which releases greenhouse gases into the atmosphere.

The greenhouse gases include water vapour which only stays in the atmosphere for a few days but largely impacts the warming of the planet. Other gases include nitrous oxide and methane which are also released by human activity but are less abundant than carbon dioxide which also persists for much longer in the atmosphere to cause global warming.

We derive the evidence for global warming by observing extreme and damaging weather events such as more frequent natural disasters such as floods, winter storms, downpours and hurricanes. We also observe glaciers and ice sheets melting at a horribly fast rate in the polar regions which results in the rising of sea levels in different regions of the planet. The rising temperature of ocean waters results in rising sea levels damaging coastlines or seashores. This is also closely linked to the movement of tectonic plates which are large, moving pieces that make up the outer layer of the earth. Moreover, this in turn is related to the change in structure and internal movement of mountain ranges. Needless to say, climate change is rapidly altering the geographic make-up of our planet in terrifying ways.

The Holy Quran is the Book of God which enlightens us about every matter possible about life on this planet and beyond. It is no different with Climate Change. For instance, in Chapter 30 (Al-Rum), Verse 42 of the Holy Quran, we read,

“Corruption has appeared on land and sea because of what men’s hands have wrought, that He may make them taste the fruit of some of their doings, so that they may turn back from evil.”

“And when the mountains are made to move,”

Additionally, we read about the heaven or so to say the climate and the sky breaking apart in Chapter 82 (Al-Infitar), Verse 2,

“When the heaven is cleft asunder.”

These verses clearly allude to the above-mentioned findings and confirm that it is in fact human activity which largely contributes to global warming and climate change. Moreover, it also urges mankind to stop and reflect upon what they are doing wrong and return to doing good.

For instance, humans can practice being more “green” by planting trees as trees cleanse the atmosphere by absorbing carbon dioxide from the environment and releasing oxygen. Moreover, we should opt for public transport when it comes to school runs. Commuting with people going to the same destination as you helps to reduce air pollution and thus protects the ozone layer by reducing air pollution created by numerous vehicles on our roads. Additionally, reducing the amount of energy we use in our homes can also protect our environment. Simple acts like switching off the light when you leave a room saves electricity and is thus eco-friendly. The Ahmadiyya Muslim Community holds various workshops for both the young and old to promote a greener society. This includes the planting of trees. Your school and local council most probably also have environmental clubs so why not give it a go and sign up to them. While you are at it, why not also make sure your plastic water bottle also goes into the right recycling bin. Who knows, we may well be just as good at protecting the environment as Greta Thunberg!