Millions of copies of the Holy Qur’an exist across the world today. Every copy to have ever existed is identical and completely unchanged, word for word, from the text that was revealed 15,000 years ago. This perfect preservation of the Holy Quran is no coincident; rather Allah himself promised that the Holy Qur’an would be safeguarded in its original form. Allah says:

Verily, We Ourselves have sent down this Exhortation, and most surely We will be its Guardian. (Al-Hijr, 15:10)

This verse is powerful proof that only a divine creator could have written this holy scripture, meaning the existence of the Qur’an itself is testament to the legitimacy of its origin. No mere mortal could claim such a strong prediction about the preservation of a book.

Not only is the Holy Qur’an a book of guidance, providing moral and social codes for Muslims to live by, but it also contains prophecies about the future, some of which have been fulfilled already. Examples of a few such prophecies include:

This verse signifies the environmental pollution that is currently widespread and has been caused by the action of humans. Both the land and the sea have been affected, from oil spills in the sea to deforestation of trees and chemical fumes in the air from factories.

This verse so simply predicted modern day science of genetic engineering and cloning, as well as plastic surgery.

At the time of the revelation of the Holy Qur’an, travelling across mountains was an impossible task. After the invention of dynamite, humans were able to make tunnels through mountains to travel across them, as if the mountains had been ‘moved out of the way’ as this verse prophesied.

“And He has created horses and mules and asses that you may ride them, and as a source of beauty. And He will create what you do not yet know.” (16:9)

The Holy Qur’an specifically foretold the invention of air travel in this simple verse, a thought that was unimaginable some 15,000 years ago.

“And when various people are brought together.” (81:8)

There was a time when humans did not realise that civilisations were spread across the world or how to reach them once they did. Now, a 10 hour plane journey can enable us to cross the Atlantic ocean and unite us with humans living in Canada. Furthermore, the invention of telephones and the internet has enabled us to almost instantaneously connect with people across the globe.

“Their skins will bear witness against them as to what they have been doing.” (41:21)

This verse of the Quran talks about the discovery of DNA and fingerprinting. Now, fingerprints are used as identification as well as evidence in crime scenes to find the perpetrator.

“And among His signs is the creation of the heavens and the earth, and of whatever living creatures He has spread forth in both. And He has the power to gather them together whenever He pleases.” (42:30)

It is only recently that the presence of extra-terrestrial life has been proven by scientists. We have still not been able to make contact with or see them. Allah has hinted about this scientific progress that is yet to occur!

The Promised Messiah (as) says:

“I can confidently claim that anyone who endeavours to write in defence of the Being and existence of Allah Almighty will ultimately have no choice but to accept the God presented by Islam. For every page of the Book of Nature testifies to His Being and man naturally bears the impress of the very same God in his person.” (Malfoozat Volume 1, page 80) 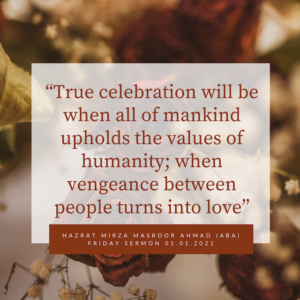